Midnight falls on the ABC Island 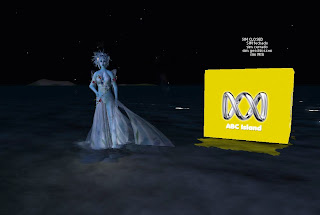 
As midnight falls on the ABC Island in Second Life, Sedja captures a last post. 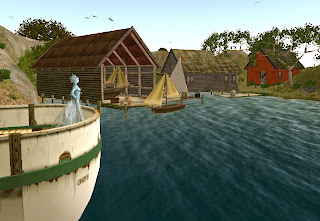 In the couple of years leading up to the founding of Space Pioneers, Stjarna and Hulda explored many places in Second Life, slowly discovering how the virtual world worked.

Some folk dive in and do much swiftly, but other people quietly explore to find out what is possible, as they learn the ropes of the virtual culture.

After exploring many of the separated regions, or islands, around the ABC, exploration of the mainland in Second Life was begun, both land and sea, where places like the little island port of Halfhitch were found in the vast Blake Sea.

There are many islands scattered around this sea, which are all open to the public, where visitors to Second Life can explore.

Beneath the waves are many sunken vessels and coral reefs and upon the water the hobby of virtual world sailing is pursued by many, including regular races.

There is a virtual wind in the Second Life air, which fills the sails of yachts, drives hot air balloons along and sends the smoke of a fire in the direction of the moving virtual air.

Free boats are available in many places, including in the harbour at Halfhitch, so denizens can practice the arts of sailing.

Beneath the waves in the Blake Sea ancient ruins begin to appear, especially around one particularly large island, which shall appear next on our tour following the trail of the Space Pioneers toward the launch of their project. 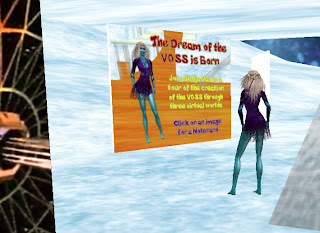 The first two boards are up in the VOSS, at the VOSS landing point via the teleporter, to tell the story of the creation of the VOSS.

The VOSS tour entries in the blog are also becoming the displays, with the text available as a Notecard from the board.

The VOSS (virtual orbital space settlement) is located above Sprite in InWorldz.

I have my first image ready to be displayed in the Sedja gallery in the VOSS.

Now to inspire Stjarna to build it.

Stjarna is the main builder at Sprite.

Having different forms in different virtual worlds leads to differences in character and a diversity in creative threads.

This diversity will inevitably lead to a different style of work with art in InWorldz.

Overtime, maybe the work of the worlds will merge and the vision become threads that, like the strands of a rope twisted together, merge to become a stronger whole.

Not too twisted, I hope.

The spirit will fly.
Posted by Unknown at 02:09 No comments:

The Dream of the VOSS is Born 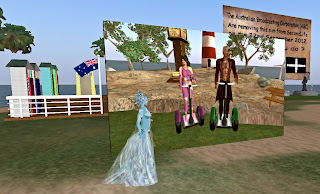 ~ image ~ Sedga at the ABC Island in Second Life with an image of the founders of Space Pioneers, Hulda Vyper and Stjarna Szondi, on their Sedgeway scooters at the island in early 2011

How about the beginning?

and for Space Pioneers the start was on the ABC Island in Second Life, where Stjarna and Hulda had been learning how to function in the virtual world, venturing out on expeditions and returning to this safe haven.

ABC stands for Australian Broadcasting Commission and as the national broadcaster in Australia, is owned by the people.

and also in real life with an article published in the Tasmanian Times on the same day ~
http://tasmaniantimes.com/index.php?/weblog/article/the-official-launch-of-the-space-pioneers-and-the-bifrost-campaign/

The leading light of the vision, Stjarna Szondi, had been involved in space advocacy since joining the L5 Society in 1976, when he became very familiar with ideas for building cities in space.

Stjarna was joined in this adventure by a scientist, Hulda Vyper, who stepped on board as the science officer with Space Pioneers.

The simple aim was to solve the problem of building an orbital space settlement in the virtual world, or find where this was happening, where an avatar could walk around the inside of a wheel shaped space settlement.

In space the wheel would be rotating and the outward force would generate gravity on the inside of the wheel.

A virtual orbital space settlement (VOSS) would allow a realistic space environment to be created and used, as if the avatar was in a city in space.

Space Pioneers Stjarna and Hulda were not imagining a large project, just a simple working model that could be used in education, science and for recreation.

When a dream begins with deadly intent, you never know what will happen.

So the dream began.

The Doomed Island of Hope 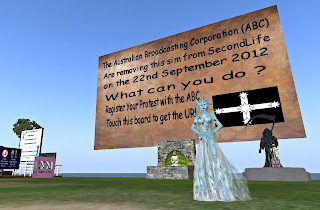 ~ image ~ Sedja at the doomed ABC Island in Second Life

A visit to the ABC Island in Second Life revealed a growing protest movement, with a large board raised telling people where they could lodge a complaint directly with the ABC ~
http://www.abc.net.au/contact/complaints.htm

Even at 4am, Eastern Australian Time, the dedicated Rails Bailey was there with a placard, who has also launched a special site in an attempt to save the ABC Island from sinking beneath the virtual waves ~
http://railsbailey.com/

As the ABC (Australian Broadcasting Commission) is ultimately owned by the Australian people, citizens can have their say by also writing to their political representatives, to suggest, or demand, that the nation maintains a proper presence in the virtual worlds for a growing number of virtual world users.

If the ABC Island is still lost, the idea can live on, if people dream and seek ways to turn the impossible into history.

The flag on the board is the Eureka Flag from the doomed Eureka rebellion on the Ballarat gold fields in 1854. This symbol is also the Southern Cross flag, which became the inspiration for the stars of the Southern Cross on the Australian national flag.

Saturday 22 September is the last day, if there is no reprieve for the doomed ABC Island.
Posted by Unknown at 12:50 No comments:

Spirit Rise to Meet the Stars 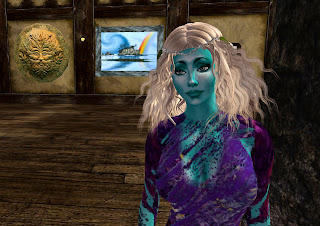 It is with a little sadness that I must depart this shore, for a little while, to follow the journey of the Space Pioneers who began at the ABC Island in Second Life, founded a project on the island of Nautilus and then struck out across the void to launch the island of Sprite in InWorldz.

This story will include their development of a virtual space program and the key instrument for this, with the VOSS (virtual orbital space settlement), in which any number of people can become directly involved ~ as if in space.

They are very ambitious, aiming to build the first orbital space settlement in the Solar System, a city among the stars and a style of construction that may prove to be the basis of the first human migration to another star system.

If they do, it will have begun with a simple vision ~ to develop a working model of an orbital space settlement in the virtual world.

I have lodged a note in the InWorldz Forums about this journey through the virtual worlds ~
http://inworldz.com/forums/viewtopic.php?f=71&t=13285

Do you see the painting behind me?

This is a work by Stjarna, the co-owner of Sprite with Hulda.

The work is simply called ~ 'Clydes Island' ~ and is of a tiny rocky islet on the coast of the Forestier Peninsula in Tasmania, the southern island State of Australia.

The waters in front are called Pirates Bay, which is where Eaglehawk Neck is found ~ a sandy connection to the Tasman Peninsula, once guarded by fierce dogs.

This area was once a rather big British Prison in old Van Deimen's Land.

Stjarna says the harbour at Sprite is a bit like Pirates Bay.

Now tourism is a bubbly affair for the peninsula, including at the iconic Port Arthur, which was once the main prison town on the Tasman Peninsula.

Ruins attract visitors and people have ever found the ruins at Port Arthur strangely appealing.

It was on one tragic Sunday in 1996, when Stjarna was completing this painting, that news came over the radio of events at Port Arthur.

It turned out that a mad gunman had killed 35 people and wounded 23 more.

Stjarna ever wondered about the connection of this painting with the Port Arthur massacre and how the rainbow was like the Viking bridge to the heavens, called Bifrost.

Why the vortex with those clouds?

Stjarna felt it just seemed right that it should be like that ~ and then events rolled out around a brooding land of pain and memories.

This is why Stjarna offered this painting to the people of East Timor, when they gained their independence from Indonesia in 1999 and it was accepted by their first president, Xanana Gusmao.

The people of East Timor had suffered the massacre of a couple of hundred thousand of their citizens, as a mad regime in Jakarta tried to hammer them into the Indonesian empire.

They refused to be hammered.

Now we see the tragedy in West Papua, which is a territory the size of France, the western half of the island of New Guinea, suffering a similar story to East Timor and for much longer, since the United Nations allowed Jakarta to move in as the new colonial power in 1962.

The story of West Papua will rise in this journey with the Space Pioneers, because it merges with many of the main events of space development, such as the launch of the Moon Race and the 1969 Moon landing.

This is the human story of tragedy and achievement.

Some events cannot be avoided, as we are tumbled through the vicissitudes of life, but at other times, we do have choice.

Space Pioneers wonder if we now have an option with expansion beyond Earth, that we have had that choice since 1969, but it may only happen when a large enough number of people rise to seek it.

Will the human spirit rise to meet the stars?

Will the World allow the West Papuan people to find freedom beneath their stars.

Maybe those two events are connected, in a strange kind of way, as with the rising of East Timor from tragedy, the freedom we come to win is not always the life that the powerful would have us live.

On the Bridge at InWorldz Desert Island 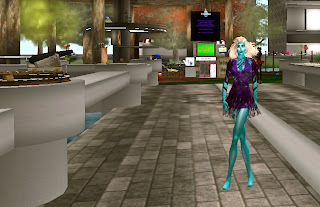 Here I am, on the bridge at InWorldz Desert Island, where all new people first arrive and which is a popular gathering point for the denizens of Iz to catch up and share news.

And nobody is holding a gun at my head to be here (spot the cannon?).

Having many "Free" stores also draw people back, including a range of offerings in bodies, clothes, furniture, scripts and even a statue of the founder of Second Life, Philip Rosedale in his Linden avatar form, which can be found scattered around these territories, including at Sprite.

Did you notice the new skin?

Lilly told me about Abraminations, which I knew of from Second Life and all the fun things they sell ~ so off I teleported and found a neat set of metallic hides, the Wildcat Metalic Skins, created by Wildcat Snowpaw.

Now that is a name with claws attached.

The skin is described as Turquoise.

This may help with my equipoise.

It's not quite the exquisite blue crystal hide that I wear at Nautilus, but maybe it will do, along with the Gold.

Yes, metallic gold arrived in the set and now I can live as if I have felt the touch of ~ Mr Goldfinger ~ from time to time.

I wonder what would go well with a golden skin?
Posted by Unknown at 13:54 No comments: